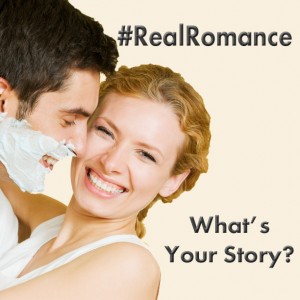 For Real Romance week I wanted to share what a real romance means to me. All my stories have an underlying theme of something I believe in wholeheartedly. Fate. That two people who were meant to be together will end up together despite all the obstacles or challenges they may face.

Admittedly in my real love story there wasn’t nearly as much drama as the stories I write but we’ve faced plenty of challenges along the way. When I was asked to share a real romance story, a story I’ve shared before came to me. But I wanted to share it again because it always makes me smile. The story of how I met my husband. I call it Our First Kiss.” *Sigh*

We met in the early nineties when “underground parties” were the thing to do on weekends in East LA. You’d drive around looking for some inconspicuous-looking guys (or girls) standing on a corner. You’d pull up, and they’d hand you a flyer with the location of the party that night. It was usually at an abandoned warehouse where the DJ broke in and set up lights and everything. A crew collected money at the door, and everyone would party until the cops caught wind of it and broke it up. Then we’d move on to the next party. (Ah, the nineties! I so have to write a scene like this one day.)

At the time, I was in an off-and-on relationship that I needed to walk away from. But I was stuck in a rut, meeting guy after guy who was just “meh,” so I kept getting sucked back into the old relationship. My best friend, Amber, convinced me to go out and start having fun without the guy, and one night we went to one of these underground parties. Because of the potential danger, Amber and I would always park outside and stake out the joint before going in. For one, we didn’t want to be the only girls there, but we also liked to sit and check out the guys going in while listening to music.

We hadn’t seen anyone interesting. Since I’m tall, I’ve always been partial to tall guys—the buffer the better, of course. I was keeping an eye out for the big guys. This car pulled up and parked in front of us, and four guys got out. Among them was a guy much taller than the other three, wearing a long coat that made him look cool and sexy, like the guys on the cover poster of the movie Tombstone, minus the hat and mustache, of course. I watched as he walked out and around the car. Amber, knowing me all too well, said exactly what I was thinking: “Well, hello!”

I couldn’t see any other details in the unlit parking lot, but I’d seen enough. My eyes followed him all the way into the warehouse. Amber and I followed them inside, and the search was on. The place was super dark except for the DJ lights, and after about an hour, the party was broken up by the cops, and we all had to leave.

Disappointed that I’d never found my mystery guy, I was happy to see their car was still there when we got to mine. So we sat and waited, and then there he was again, walking back to the car, looking even better now that I’d had my heart set on meeting him for over an hour!

At this point, I was thinking okay now what? I didn’t know it yet, but Mark had never been a big flirt. He’d always been the quiet, unassuming type. But one of his friends was a huge flirt, and he came up to the passenger side to ask if we knew where the next party was. We did. Inside, someone had handed us another flyer. Amber, who always thought quickly, said, “Yeah, here’s the flyer, but we don’t know how to get there.” This prompted Mark’s friend to say, “Oh I do. You guys can follow us.”
An hour later we were still driving in circles, and Amber and I needed to use the restroom bad. This was pre-cell phone days, so we couldn’t call or text to tell them we were pulling over. So having no choice, we pulled over at the next fast food place we came to, and they kept driving. I was so disappointed. But just as we were getting back in our car, they pulled into the parking lot. They came back to look for us when they realized we were no longer following them! After many cracks about us trying to ditch them and them admitting they had no idea how to get to the party, we were on our way to a different party. I still didn’t have Mark’s name at this point!

Finally, we got to the party. Once out of the car, I met Mark, and we very casually exchanged names. At closer range, I decided he was even cuter than I thought! He had dark, wavy hair, hazel eyes, and a very shy-but-sweet smile that would morph into a playful smirk every now and then, making my insides liquid. But because one of his other friends—the talker of the group—was chatting my ear off, Mark thought I was into his friend (who is, mind you, about a foot shorter than I am!).The talker and I, along with Amber and the flirt, were stuck hanging out and drinking beer in the parking lot while Mark and his other friend went inside to check out the party. Grrr!!!

Right then, I decided that if he came back alone, I was going to pick up my game and talk to him. When he returned to the car without a girl in tow, I followed through. As quiet as he was, he laughed a lot. By the end of the evening, I’d succeeded in getting what I wanted: his full attention. We moved away from the crowd to talk alone, and I gave him my number. The night ended without a kiss, but he was sweet and very respectful.

Several dates and many deep phone conversations later, we’d gotten all the basics out of the way, but still no kiss. Through these conversations, I found out that the night we met he wasn’t even supposed to be there. Fate. His friends showed up at his house, honked, and said “Let’s go!” He walked onto the porch and told them he wasn’t feeling it, and they insisted he get his ass in the car. He wasn’t even dressed to go out—T-shirt and jeans—so he ran back in the house, threw on the coat and got in the car with them. I also found out he’d never been in a serious relationship. He found out about my off–and–on–again relationship, but I told him I was done with that guy for good. And I finally was.

We were on our fourth date at his friend’s backyard party. Mark walked me into the house so I could use the restroom, and when I got out, he took my hand and walked me in the opposite direction, onto the front porch, where we were alone. He leaned against the porch railing and pulled me closer then asked, “Are you sure you’re done with this guy you were seeing for good?” I nodded, and he kissed me, very soft and very sweet. Then he did it again, only longer and deeper, and I remember sighing because I’d been waiting to see what it would be like and it was perfect.

Almost twenty-four years, two kids, and many, many adventures later, we’re still together and in my heart of hearts, I have no doubt we always will be. =) 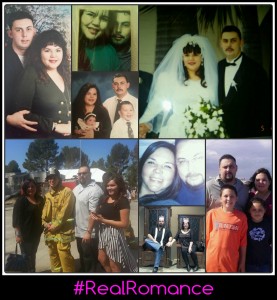 So what’s your story? Doesn’t have to be, how you met or first kiss. Share anything about your #RealRomance and be on the lookout all week for other authors sharing their stories as well.. Also enter to win gift cards, signed books, ebooks and even ARC’s by the various authors participating this week!

The raffle-copter will be live starting November 4th!